Dressed in 30 Meters of Greek Pride: The Evzones’ Traditional Uniform

The traditional uniform of the Evzone Guards of Greece is as unique as the guards themselves.

An empty space in my family’s photo album takes the place of a photograph long lost. In the photograph, my father proudly posed in front of the Parliament House in downtown Athens, Greece. He was 22 years old and serving his obligatory military training. His superior officers chose him to join the National Guard or Evzones. 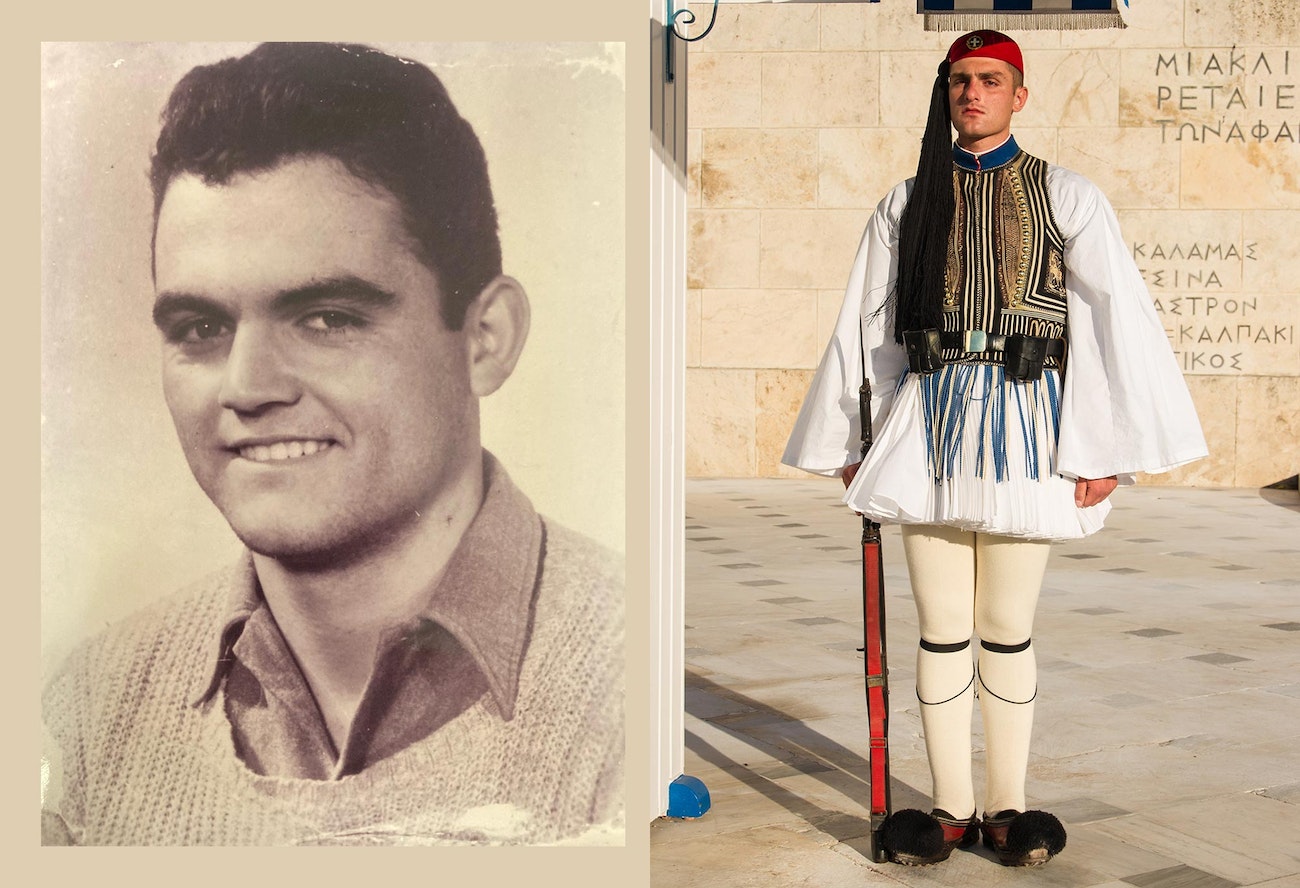 Left: The author’s father at age 17, a few years before serving in the Evzones. Photo courtesy of Harikleia Sirmans. Right: A member of the Evzones in ceremonial clothing, Tomb of the Unknown Soldier, Athens, Greece. Photo by Jebulon

In the photo of my father, he stands motionless and expressionless. He was not allowed to flinch or utter a word for an entire hour. He had to stand there inert and straight-faced, rain or shine. He wore a white kilt-like skirt called fustanella, a white tunic with wide sleeves under a black hand-embroidered waistcoat, white leggings, clog-style shoes called tsarouhia, and a wool fez on his head. How handsome and proud he looked! I was curious as to the expert hands that had made the beautiful stitches on the waistcoat and how long they took to make them.

Let me delve a bit deeper on the making of this uniform and how it came to life: Evzones (Greek: Εύζωνες, which means “well-girdled”) were elite light infantry and mountain units of the Greek Army that fought the Greek War of Independence against the Ottoman Empire (1821–1829). Their distinctive fustanella uniform evolved from the traditional dress of the klephts (Greek: κλέφτες, meaning “thieves”). Klephts were Greeks who refused to obey Turkish rule and fled to the rugged mountains. They lived as thieves, but they were the ones who formed the core of the resistance to the Ottoman occupation of Greece. After the war, King Otto, the first king of Greece (1815–1867, ruled 1832–1862), declared the fustanella as a symbol of Greek national pride, bravery, and resistance. He imposed it on the royal court, the military, and the government officials.

The making of the Evzones’ uniform

The everyday Evzone uniform is a long tunic called doulamas (Greek: ντουλαμάς). In the hot summer months, Evzones dress in a thin khaki-colored cotton tunic, as shown in the opening photo. In the cold winter months, they wear a thicker navy-blue wool tunic. On special occasions, the Evzones wear the Uniform of the Islands, a Cretan-style uniform, to honor the war fighters of the Greek islands. 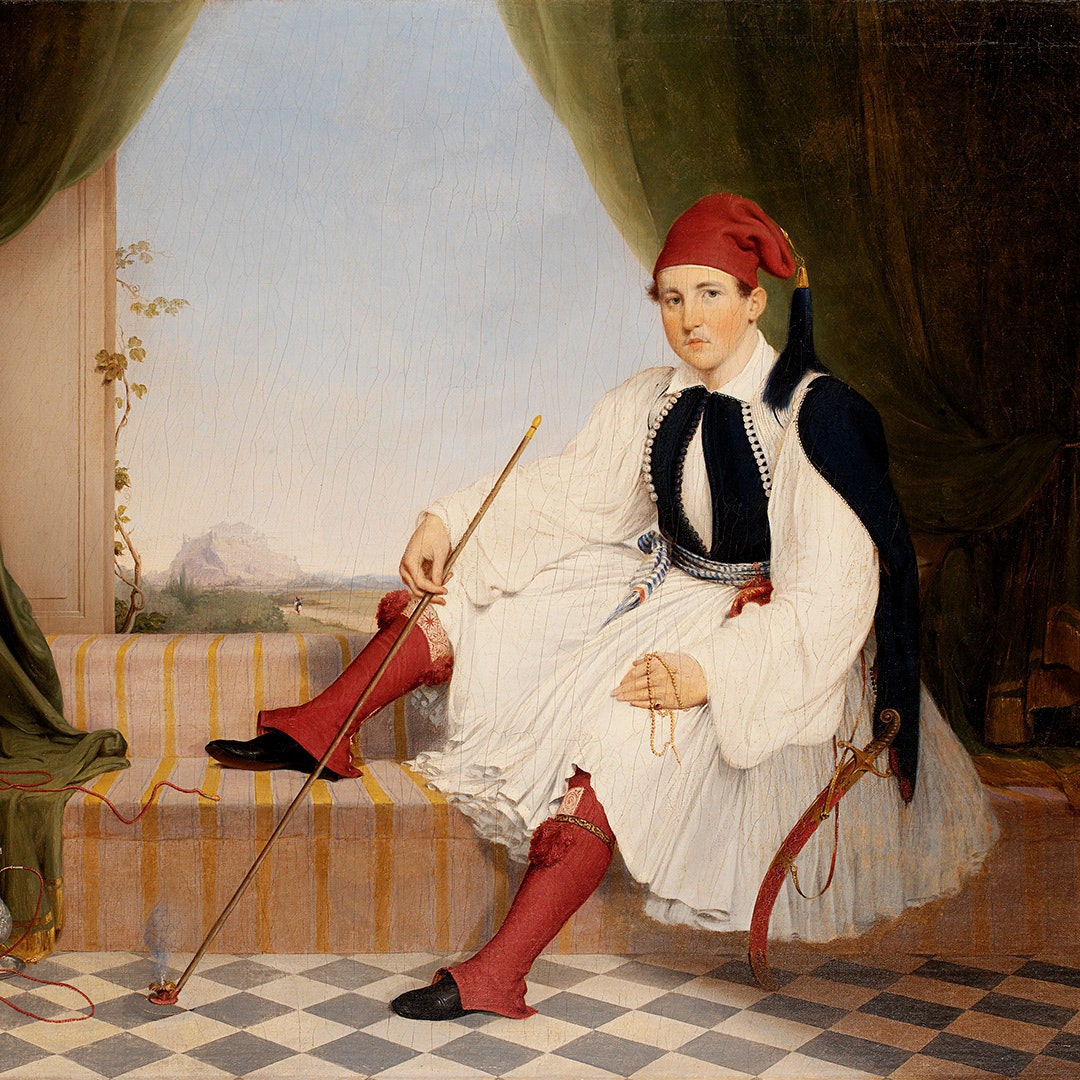 Portrait of John B. Carmac in Greek Evzone Costume, painted by Walter Gould (1829–1893) soon after he traveled to Greece and Turkey. Courtesy of Smithsonian American Art Museum, Museum purchase

The formal Evzone uniform is white, and it is worn on Sundays, bank holidays, and formal visits. These formal uniforms are labor-intensive and costly because each one is handmade and embroidered by several tailors at the Presidential Guard training camp. Only men can wear them.

Fustanella (Greek: φουστανέλα): A kilt-like skirt made of 30 meters (98 feet) of white fabric with 400 pleats that represent the 400 years of the Turkish occupation. The white of the ypodetes and fustanella represents the purity of the national independence struggles.

Fermeli (Greek: φέρμελη): A hand-embroidered waistcoat and the hardest part of the uniform to prepare. It takes one month and ten tailors to embroider various traditional designs in white or gilt wool thread. To highlight the borders of the fermeli, tailors may use gold rickrack trim or cord. They sew the cord on the fabric with a simple couching stitch to create designs such as simple lines, swirls, spirals, and crosses. One of the embroidered designs is the military rank of the guard. The fermeli is made of wool or velvet fabric, usually in black or red. It is worn over the ypodetes.

Pharion (Greek: φάριον): A scarlet wool fez (cap) with the appliqué of the national emblem of Greece sewn on the front and a long black silk tassel. The national emblem consists of a white cross in a blue crest with two surrounding laurel branches. The pharion represents the sacrifices and blood of revolutionaries.

Epiknemides (Greek: επικνημίδες): Garters made of black silk, decorated with a tassel, and fastened below each knee.

Tsarouhia (Greek: τσαρούχια): Distinctive clog-style shoes made of handstitched red cowhide. Each shoe weighs 1.5 kilograms (3.3 pounds) and has 60 nails embedded into its sole. The toe of each shoe points upward and is decorated with a large silk black pompom. 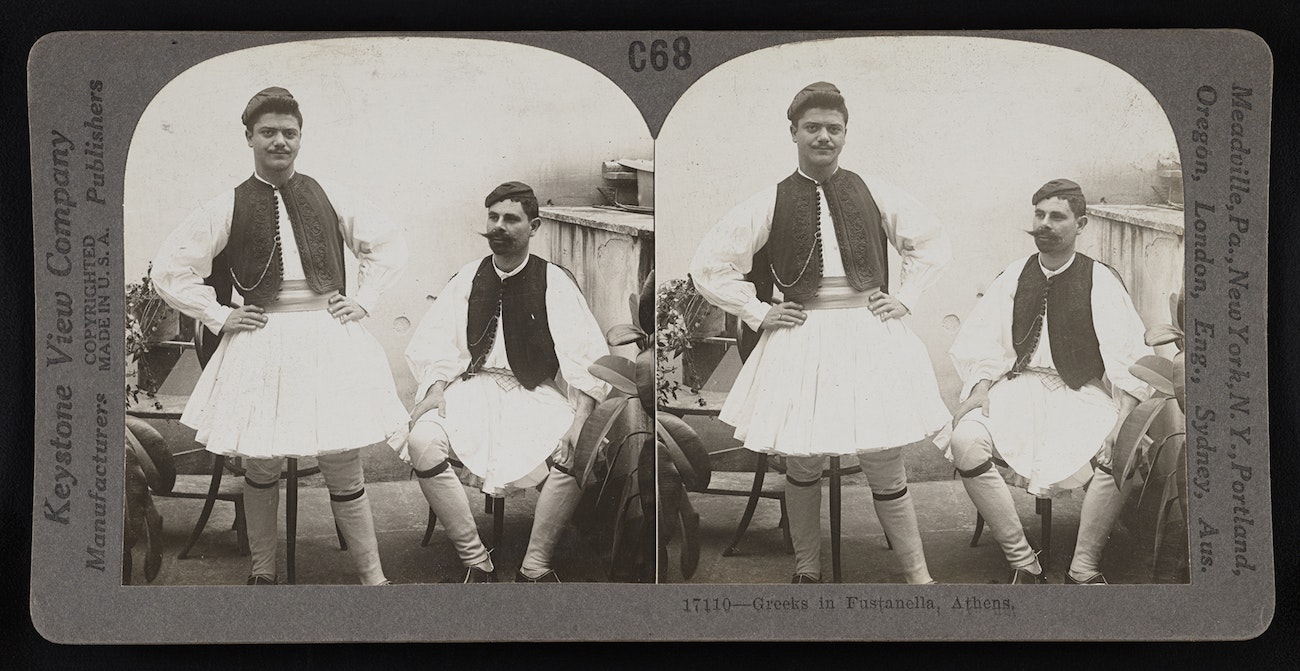 Greeks in Fustanella, Athens. Courtesy of the Library of Congress, Prints and Photographs Division

The origins of fustanella can be traced to the traditional outfits worn by the brave revolutionaries during the Ottoman occupation. Today, it’s not only the Evzones who wear the fustanella as they stand in splendor in front of the Parliament House, but also folk dancers and schoolchildren when they parade in the streets on ceremonial occasions and national holidays.